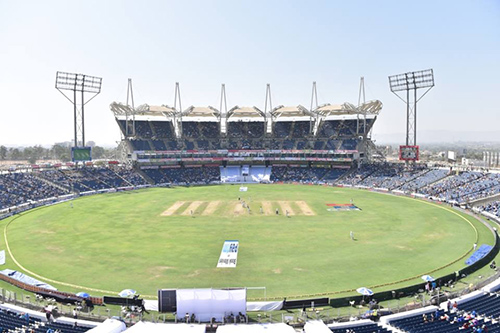 The dream to have our own stadium,started to turn into reality, in 2005 with the Managing Committee of Maharashtra Cricket Association taking a decision to build a new stadium for the Association. A suitable piece of land at Village Gahunje, along the Mumbai-Pune Expressway was identified in the year 2007. Nestled amidst the resplendent greens in a natural ‘bowl’, this land is flanked by hills on one side and a breathtaking view of the landscape on the other side - making it a very picturesque stadium.

The location of this stadium is such that it is easily accessible for the cricket buffs of Pune and Mumbai as well:

- It is within the close vicinity of the IT Hub of Hinjewadi, the auto hub of Chakan & the industrial belt of PCMC.
- It is also just a 2 hour drive from Mumbai.

Meanwhile, with the assistance of several agencies involved in the project, MCA shortlisted various construction firms of national repute for carrying out the main construction work. M/S Shapoorji Pallonji & Co. Ltd. were finally selected and awarded the contract for the construction of the first phase of the stadium in November, 2009; after an elaborate technical evaluation and commercial negotiations by the Managing Committee.

Work on the site started on the 14th of November 2009 after the architectural design was completed by Sir Michael Hopkins of Hopkins Architects, London, England. The structural design was provided by the Adams Kara Taylor (UK) Ltd. Tata Consulting Engineers acted as the MEP consultants. Buro Happold India Ltd, Dongre & Associates and Eco Design India Pvt Ltd were the other agencies who provided project management, cost control and additional structural inputs respectively.

The capacity of the stadium today on completion of the first phase is 45000 seats.

A mammoth 6000 metric tonnes of steel went into the fabrication and erection of the imposing steel structures to construct the south stand which is also the Main Pavilion. This was a very challenging task for the contractor and all the partner agencies involved. SPCL rose to the challenge and successfully completed the erection of themassive structures for the south stand. The entire stadium was built using modern construction methods, where precast elements were used extensively with steel structures to ensure quality.

The south stand also provides for VIP and Corporate boxes. The wicket block with as many as 15 wickets have been developed by MCA with their in-house knowledge and expertise.

It is a known fact that rains causeinterruptions during matches, with several matches getting abandoned at many grounds on account of poor drainage systems. To avoid such an eventuality MCA has opted for a sand based outfield. The sand based outfield has been laiddepartmentally by MCA with the technical assistance of Sports Turf Research InstituteUK. A drainage layer of gravel, blinding layers of washed grit & sand with the rootzone layer of silica sand, zeolite and cocopeat have been deployed to make the drainage system as efficient as possible.

Bermuda grass has been chosen for the outfield and a pre grown turf has beenprocured from Golf Designs, Mysore. The drainage system has been effectively tested and it has been observed that even during heavy showers, water on the outfield drains out as designed, enabling the game to resume in a matter of minutes. A pop up automatic sprinkler system for proper, timely and systematic irrigation of the outfield has also been installed from Jain Irrigation Ltd.

In order to provide the spectators with the luxury of comfort seating even quality tip up seats are provided in all areas of the stadium. The stadium and the seating arrangement therein are so designed that a total unobstructed view is assured from each and every location, thereby ensuringvalue for money for each and every spectator. Seats have been imported from CAMATIC, a reputed manufacturer from Australia, with due importance being given to comfort and durability. Flood lights have been provided by PHILIPS India Ltd, leaders in illumination technology. Double column lighting masts have beenerected in the stadium to ensure the least light scatter outside of the playing arena. 50 square meter LED Screens sourced from the globally renowned manufacturer BARCO Belgium, have been mounted on all the four lighting masts so that everyone is able to watch the replays without having to movefrom their seats.

Fully automated turnstiles from SKIDATA, Austria, have been installed to regulate any unauthorized entry into the stadium. A captive power plant of 3.6 mega watts has also been installed, supplied by Kirloskar Oil Engines Limited, Pune.

A dedicated pipeline has been laid down from the Pavana river to the stadium for pumping raw water from the river. A modern water treatment plant from ION EXCHANGE has been installed to treat the water to potable quality.

Indoor and Outdoor air conditioning units in important areas with a Ventilation andExhaust system for sanitary blocks and other enclosed public areas have been installed. P.A systems & CCTV security and surveillance systems have been appropriately deployed at various locations.

A modern venue operations centre has been installed by Honeywell Automation along with Cisco Systems.

This imposing stadium with its modernfacilities and amenities was home to its first Ranji trophy game, played between Maharashtra and Himachal Pradesh on the 21st December 2011, following a soft opening of the ground at the hands of Mr. Shashank Manohar.

It is now the pride and the home of the Maharashtra Cricket Association, and since its opening to the public has already hosted many Ipl and international full house cricket matches flawlessly. It will stand testimony to many more glorious matches that will be played in the years to come. In November 2015 this facility after inspection by the ICC was granted approval as a test match center, and has hosted the very first test match in February 2017, in the 80 year history of the association.